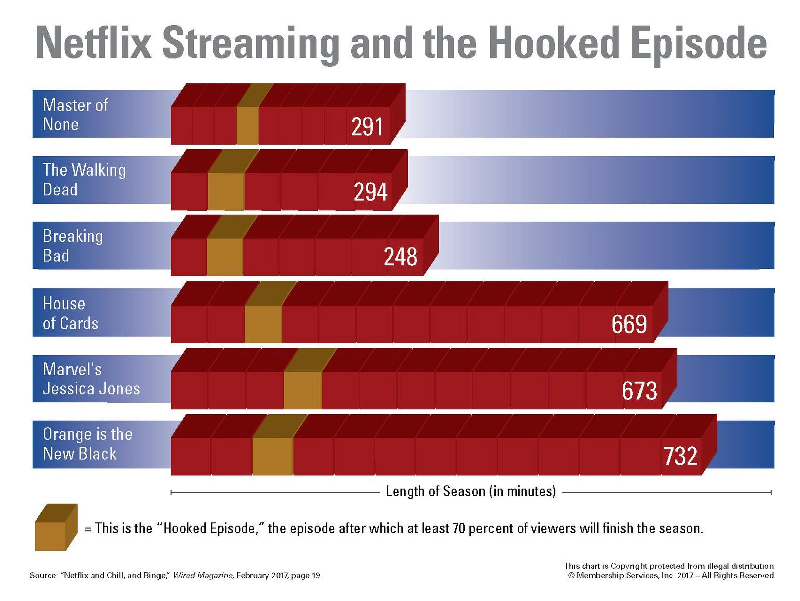 Since completing the Boston Marathon last April, I’m often asked, “When is your next marathon?”

“My next marathon is going to be a Netflix binge-watching marathon,” is my current answer. “With all of our training, my wife and I fell behind on our binge-watching of the new season of ‘Orange is the New Black.’”

But what makes a show binge-worthy versus a show you watch once and move on from?

I was fascinated by Netflix data published by Wired magazine that shows when a series becomes addictive.

This brings up an important question for you: At what point do your new subscriber members become hooked?

You see, this is the exact same pattern I see in every membership and subscription program I’ve studied in the past two decades. A lot of new subscribers start, but many of them disengage in the first few weeks or days. Then a group reaches the “retention point,” where 70–80 percent become subscribers for life.

Armed with the Netflix data, producers and writers are writing the first episodes of their series to move that hooked episode earlier in their series. The quicker viewers get hooked, the more likely they are to watch the entire season, giving the producer funding for the next season. This is similar to your subscription. Getting your subscribers to the retention point faster is the secret to slashing churn rates.

You move subscribers to this retention point by inspiring them to improve themselves, giving clarity over their pathway to improvement, helping them take the first step, and revealing your unique personality. When you’re intentional about these components of your new subscriber welcome, you can move your retention point to immediately after the sale.

PS – This is also an important lesson for anyone creating sales letters or VSLs. There’s a lot of talk about keeping these short. I have a client who is using a 118-minute VSL. This Netflix chart illustrates the hooked episode has no correlation with the length of the season. Once they are hooked, 70–80 percent will stay through to the end. “What is the optimal length?” is the wrong question. Rather, ask yourself, “What is the hooked point, and how do we move that earlier so more viewers stay to the end?”