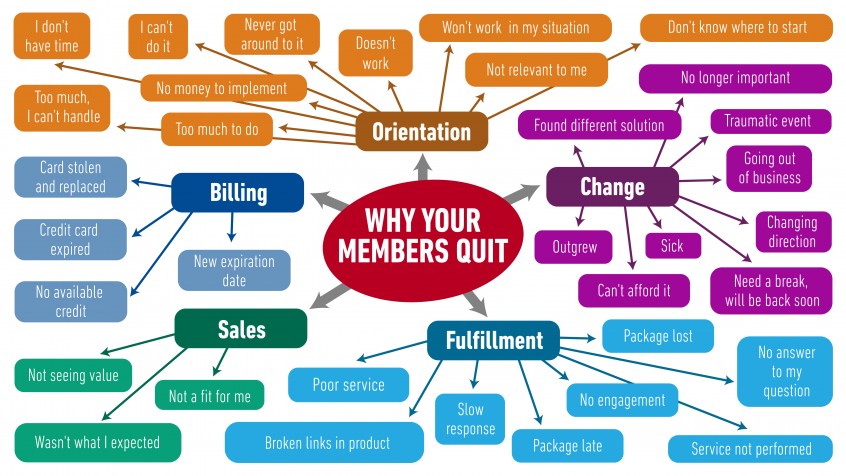 With all the reasons your members have for quitting, is it any wonder you’re able to keep your members at all?

As a matter of fact, while there are many reasons for your members to quit, there are five — and only five — reasons your members will stay. Members stay for …

1. Return on investment — value received in excess of their membership investment.
2. Mission — to be part of a movement that’s bigger than themselves.
3. Growth — an opportunity to contribute back to the community.
4. Recognition — applause and acclaim from a peer group they respect.
5. Connection — relationships formed with other members.

But none of this matters if they fall out of “enchantment.”

When your new member joined, he was excited about solving some problem or experiencing some breakthrough. Your sales materials promoted the transformations he would undergo as a member. He had a mental picture of what life would be like as a member.

Then he joined. In the minutes, hours, and days since his membership first began, his excitement has waned. It may be his expectations were wrong to begin with. It could be your performance wasn’t up to par. Or, more likely, other things have caught his attention.

Some smart marketers have addressed this using an email follow-up series after someone joins their membership. Most often, these emails feature the benefits members receive and show the new member how to get started. Nice, but wrong.

This is wrong because it doesn’t address the problem. Yes, you could be hearing things like “I don’t know how to access my benefits” or “I didn’t know that was included in my membership,” but you aren’t going to answer those questions with emails stuffed with facts.

Most of the member retention questions I receive are focused around how to create return on investment. Do you provide done-for-them services, membership websites, printed newsletters, or other exclusive content? All of this is good, but for decades in the association industry, we renewed memberships at greater than 95 percent a year without content as strong as yours. We renewed members and kept them engaged because of the other benefits. The question shouldn’t be “How can we deliver more value?” Instead, you should be asking “How can we branch out beyond ROI benefits to create a community where members eagerly want to engage, refer, and ascend?”

When your member joined your membership, they had a mental picture of what life would be like when they bought your program and implemented it. The biggest reason your members quit is they’re losing sight of that picture.

You’ll never stop all your members from quitting, nor do you want to. Some churn is inevitable and healthy. You can minimize unnecessary churn by keeping that mental picture in the forefront of each member’s mind after the sale and throughout the new member engagement process.

6 Comments on “How to Stop Your Members from Quitting”