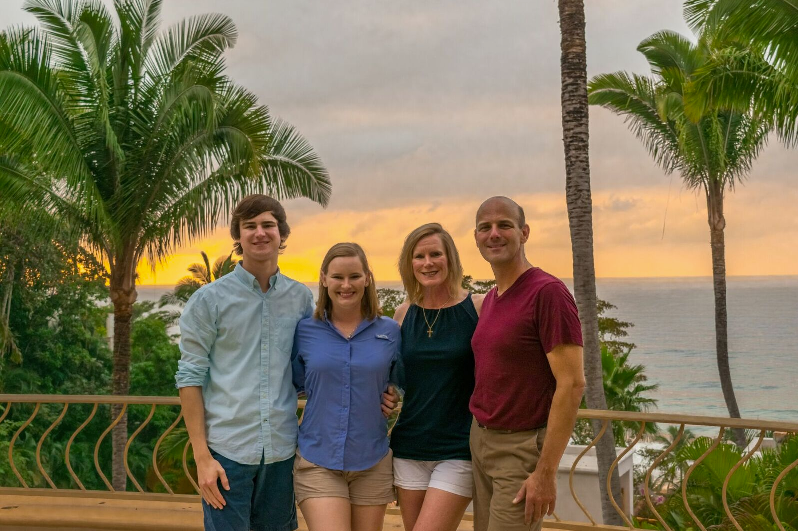 One morning in San Pancho, Mexico, we decided to cook our own lunch. This way we wouldn’t have to leave our vacation home, allowing us to enjoy the Pacific breezes and the view.

I went to the local market in San Pancho for a couple of last-minute groceries. I brought Samantha as my translator; she just finished her first semester of Spanish at Florida State University.

San Pancho is exactly the type of town Disney would create were they creating a quaint Mexican beach town. There are no traffic lights — not even stop signs. There’s one road in with a few dirt roads branching from it. A small market provides most everything you need, including a wide selection of liquor, should you drink it faster than you originally expected.

When Samantha and I arrived at the market, she shopped for the fruit on our list while I went to the refrigerators in the back of the store to buy the chicken. I looked and looked — no chicken.

Samantha asked the cashier, in Spanish, where we could find the chicken, or pollo. She got a long answer, all in Spanish. I couldn’t make out a single word. I paid for the fruit and rice, tipped the grocery bagger, and we left.

“Meat market across from the park,” was all Samantha could make out. Samantha and I got back in our car. Less than a minute later, driving toward the park, Samantha spotted a building with the word “Carnicero” painted on the side. That word means butcher. We parked and entered. We had no idea what to expect.

This was completely unlike any meat market in the States. First of all, there was no meat in the display cases. Just empty cases. There was an 80-plus-year old woman sitting at a card table. We approached, and in our best Spanish asked, “Do you have chicken?”

“Si, pollo,” she said. Then she said something in Spanish that I think meant, “How much chicken do you want?”

“One kilo,” I answered. With some effort, she got up from her seat at the card table, walked through an open doorway, and exited the building into a yard behind the market.

I leaned over to Samantha and whispered, “The chicken is about to get it.”

A couple of moments later, a man appeared, about 40 years old, wearing a red T-shirt with the sleeves cut off, revealing bulging muscles. But what made him look like a total badass was his white straw Stetson cowboy hat. There were no hair nets, safety gloves, and white butcher suits like at the supermarket back home.

This guy was all business. In his bare hands he had a chicken, whole with the feathers removed. He tossed it on the table and asked us something in Spanish. With a bored demeanor, he repeated himself two or three times while we tried to figure out what he was saying and how we should respond.

We tried to answer that we wanted white meat, blanco, breasts, but he didn’t understand our Spanglish. Samantha even resorted to grabbing her own breasts to try to illustrate what we wanted. Unimpressed, the butcher waved Samantha around the empty display cases to where he was standing to point to what portion of the chicken we wanted. Then he proceeded to rip the chicken apart, assisted with a couple of well-placed whacks of his massive knife.

He brought the chicken to the lady, who put it in a bag and handed it to me. It was still warm. That thing had been walking around just minutes before it was handed to me.

I washed it well. I deboned it the rest of the way and we enjoyed a great meal. It was the freshest chicken any of us had ever had. The price was just 45 pesos, or about $2.25 US, for chicken for the four of us and a great story.

Although he wearing a cowboy hat and was holding a really big knife, the butcher was nice enough. In fact, that’s the one thing that really stood out for us in Mexico — how kind everyone is.

At restaurants, the service was impeccable. Many of our servers spoke English, but the Spanish-only servers were attentive and worked hard to make sure our meals were exactly what we wanted.

I could see myself spending a lot more time in Mexico. I’ve already been looking at my calendar, identifying a couple of weeks for a return trip. It’ll be a great place for clients to come visit for their Fast Implementation Days. Now at least I know where to buy fresh chicken. I saw some cows around San Pancho. Maybe next time I’ll see what it’s like to buy some beef.