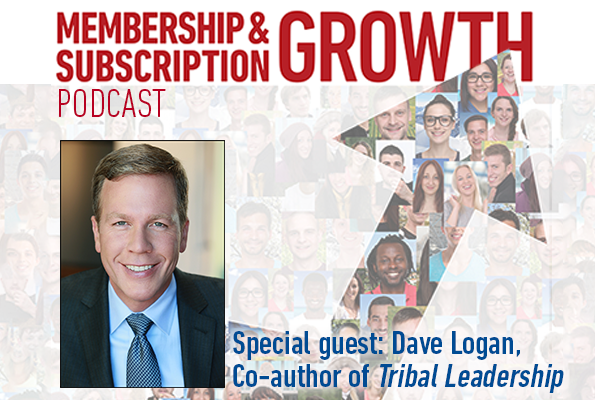 Every group exhibits language and behaviors that are unique to them. What makes certain cultures so effective at innovating change, while others are a misery to everyone who participate? How can you change a culture to unleash your group’s potential, grow your company and increase your membership retention?

I talked with Dave Logan, co-author of Tribal Leadership, about what the beliefs, attitudes and loyalties of a group can reveal about its culture, and how to improve that culture for better results.

Dave is a bestselling author, management consultant, and faculty member at the USC Marshall School of Business. Dave co-founded CultureSync in 1997, a management consulting firm specializing in cultural change, executive coaching, and strategy. CultureSync’s clients dozens of Fortune 500 companies, major nonprofits, and governments around the world.

Logan’s insights will lead you to breakout performances within your corporate team and to greater satisfaction and membership retention for your association, training program, or any other type of subscription organization where members interact with one another.

How Diagnosing Your Tribe’s Culture Can Lead to Transformation

The basic building blocks of any culture is the tribe— a group of 20 to 150 people focused on making an idea successful, Logan says. Big organizations are made up of smaller tribes that join to form a larger tribe of tribes.

If you measure a tribe’s culture on a scale of one to five, and then elevate that culture just one level, performance can increase by 300 to 500 percent, he says. “It’s the most important thing you can focus on,” Logan says. “Culture eats strategy for breakfast.”

To identify a tribe’s stage, look at what the people in the tribe say and do:

Stage One – This tribe believes “life sucks.” Life is unfair, and God just messed this up. People in Stage One steal, commit fraud, punch each other in the face and worse.

Stage Two – This tribe believes “my life sucks.” They behave passively and avoid accountability. They spend their time griping and complaining and do just enough work to not get fired.

Stage Three – This tribe believes “I’m great (and you’re not).” People in this stage are busy self-promoting and competing with one another. They get very little done.

Stage Four – This tribe believes “We’re great (and they’re not).” Think of sports. There’s usually a common vision and a common adversary. The team sets aside individual egos and takes ownership of group goals.

Stage Five – This tribe believes “Life is great.” There is no “us” and “them.” Stage Five tribes are driven purely by values, and that produces world-changing innovation. However, they can sound a little crazy and unstable, like the dot com companies which said, “We don’t need revenue, all we need is eyeballs.”

Tribes at Stage Two feel unempowered. To get them inspired, it’s best not to take on the whole group, Logan says.

“The negativity is just too great. It’ll overwhelm you,” he says. “They’ll make sarcastic jokes about you and character assassinate you without you even knowing that it happened.”

Instead, find one person in the tribe who wants things to be different and mentor him. Offer specific advice, like “Let’s start by getting organized.” Or, “Let’s start by setting some goals.”

“You’re not trying to improve the tribe, you’re just trying to elevate that one person,” Logan says.

After a week or a month, that person moves to stage three and says, “I’m great.” But they look at everyone around them, and they all really suck.

“And at that point, you make that person a mentor to someone else in the tribe,” Logan says.

Think about the sports team that suddenly starts to win lots of games. Their story is never about having the best talent, Logan says. It’s about the individual journey the players make from “I’m great, and you’re not” to “We’re great, and they’re not.”

How do the best coaches and managers get their teams there? Here are four strategies:

1. Find something that trumps individual ego. Find a common enemy that everyone has to compete against. “Maybe the opponent is better organized. If the team’s not going to die, they have to close ranks,” Logan says.
2. Identify core values. Find commitments that are more important than each person’s individual desire to be the best.
3. Find a noble cause. This is different than a core value. It’s when the status quo gets under people’s skin. There’s something that is just not right about the industry. There’s some service that people should be receiving and they’re not. “It’s something that actually makes them angry and anger can be a huge motivator,” Logan says.
4. Build triads. These are three-person relationships where everyone has two goals: to build the relationship, and to solve a problem. “There’s an issue that they’re working on together. But it’s within this context of this three-person relationship, that makes it become a very, very strong commitment for them,” Logan says.

Grow Subscriptions by Improving the Culture Between Members

Tribal leadership can work for your corporate team, but also for your subscription members. How many times do you find a person at your coaching meeting who thinks he’s too smart for the room? He says, “I’m great. I’ve heard this stuff before, I don’t need to hear it again.” You need an antidote to protect your group’s synergy.

Look for a common enemy, find core values, identify a noble cause, or steer people into triads. Whether you use it for your membership or for your corporate team, tribal leadership creates empowering relationships that increase productivity and group participation.